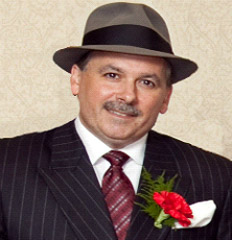 Where the Big Bands Swing!

I am delighted that your stroll down the internet today brought you to Swing Street! Our web site has two goals at heart- to introduce younger generations to the exciting sounds of the Big Band and Swing era and to provide a place where Big Band fans of all ages can find a resource dedicated to keeping the big band sound alive and well. Big bands have been around since the 1920’s, and the recent resurgence in interest in swing music has rekindled the flame. New generations are thrilling to Benny Goodman, Artie Shaw, Count Basie and many, many more artists from America’s golden age of popular music

I’ve been an ardent fan of the big bands since I discovered my Dad’s old Zenith record player and first thrilled to the music of Glenn Miller and Frank Sinatra at the age of six. I have been hooked ever since! As a child growing up in the San Francisco Bay Area, I remember adjusting my long-wire antenna to capture the signal of a distant radio station that carried Chuck Cecil’s “Swingin’ Years” which featured recordings by big bands and their vocalists.

During a period in the late 1970’s, it seemed Swing music was destined to fade into oblivion. As I began my career in broadcasting, I was determined to do my part to keep the music alive for future generations to enjoy. I first began hosting a radio show called “Spotlight On The ’30s & ’40s” on KBOO Radio in Portland, Oregon and began accumulating a collection of Big Band and Swing recordings.

During the ensuing years, I produced numerous Big Band specials for local and network radio featuring Stan Kenton’s Orchestra, Artie Shaw’s Orchestra, Tex Beneke’s Orchestra, Maxine Andrews of the Andrews Sisters and many others. After a decade-long run in the San Francisco Bay Area on radio station KCEA, my collection of Big Band music had reached over 15,000 recordings. With such a rich resource at hand, it seemed only logical to add a web presence to the weekly radio program. Thus, Swing Street Radio and the Swing & Big Band Preservation Society was born!

I hope you enjoy your time on Swing Street and will share this site and “our” music with others.