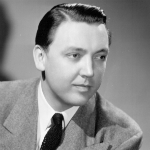 Alvino Rey (July 1, 1908– February 2, 2004), was an American jazz guitarist and bandleader. Early in life he had a knack for music and electronics. When he was eight, he built his first radio, and within a couple years he was one of the youngest ham radio operators in the country. In his teens, he was given a banjo as a birthday present. His professional career began in 1927 when he got a job playing banjo, and during the following year, he became a member of the Phil Spitalny Orchestra. He switched from banjo to guitar, then changed his name to Alvino Rey to take advantage of the popularity of Latin music in New York City at the time. From 1932–1938 he was a member of Horace Heidt and His Musical Knights. He drew attention to himself and the band when he started playing pedal steel guitar. In 1937, he married Luise King of the King Sisters. In 1939, he formed his own band with the King Sisters and moved to Hollywood, where he became musical director at KHJ Mutual Broadcasting radio network. As leader of the house band, he recorded a version of “Deep in the Heart of Texas” that was a hit in 1942.