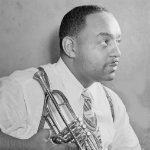 Benny Carter (August 8, 1907 – July 12, 2003) was an American jazz alto saxophonist, clarinetist, trumpeter, composer, arranger, and bandleader. He was a major figure in jazz from the 1930s to the 1990s, and was recognized as such by other jazz musicians who called him King. The National Endowment for the Arts honored Benny Carter with its highest honor in jazz, the NEA Jazz Masters Award for 1986. He was awarded the Grammy Lifetime Achievement Award in 1987, and both won a Grammy Award for his solo “Prelude to a Kiss” and received a star on the Hollywood Walk of Fame in 1994. Born in New York City in 1907, the youngest of six children and received his first music lessons on piano from his mother. From 1924 to 1928, Carter gained professional experience as a sideman in some of New York’s most prominent bands. He played with jazz musicians including cornetist Rex Stewart, clarinetist and soprano saxophonist Sidney Bechet, pianists Earl Hines, Willie “The Lion” Smith, Fats Waller, James P. Johnson, Duke Ellington, and their respective groups.