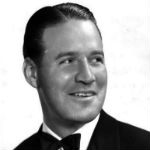 Born in Alameda, California, Heidt attended Culver Academies. At the University of California, Berkeley, he was a guard on the football team. A broken back suffered in a practice session caused him to give up football, leading him to turn his attention to music. He and some classmates formed a band, The Californians. From 1932 to 1953, he was one of the more popular radio bandleaders, heard on both NBC and CBS in a variety of different formats over the years. He began on the NBC Blue Network in 1932 with Shell Oil’s Ship of Joy and Answers by the Dancers. Singer Matt Dennis got his start with Heidt’s band, and Art Carney was the band’s singing comedian. The Heidt band’s recordings were highly successful, with “Gone with the Wind” going to No. 1 in 1937 and “Ti-Pi-Tin” to No. 1 in 1938. In 1939, “The Man with the Mandolin” ranked No. 2 on the charts.