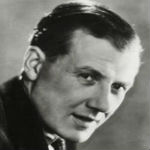 Jack Payne (22 August 1899 – 4 December 1969) was a bandleader who established his reputation during the British dance band era of the 1930s. Payne was born in Leamington Spa, Warwickshire, the only son of a music publisher’s warehouse manager. While serving in the Royal Flying Corps he played the piano in amateur dance bands. Towards the end of World War I, Payne led dance bands for the troops. He played in a ten-piece band which became the house band at London’s Hotel Cecil in 1925. This ensemble regularly performed on the BBC in the latter half of the decade. In 1928, Payne became the BBC Director of Dance Music and the leader of the BBC’s first official dance band. In 1929 the band was featured in the first ever BBC television broadcast. His signature tune was Say it With Music written by Irving Berlin. After leaving the BBC in 1932, when he was succeeded by Henry Hall, he returned to playing hotel venues and took his band on nationwide tours and made a film Say it with Music (1932), followed four years later by Sunshine Ahead.