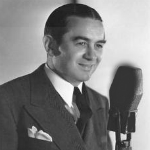 Jan Garber (November 5, 1894 – October 5, 1977) was an American jazz bandleader. He had his own band by the time he was 21. He became known as “The Idol of the Airwaves” in his heyday of the 1920s and 1930s, playing jazz in the vein of contemporaries such as Guy Lombardo. Garber played violin with the Philadelphia Symphony Orchestra after World War I and formed the Garber-Davis Orchestra with pianist Milton Davis from 1921–1924. After parting with Davis, he formed his own orchestra, playing both “sweet” and “hot” 1920s dance music. He was hit hard by the Great Depression, and in the 1930s, he refashioned his ensemble into a big band and recorded a string of successful records for Victor.