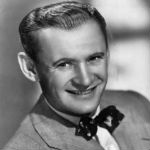 Sammy Kaye (March 13, 1910 – June 2, 1987), was an American bandleader and songwriter, whose tag line, “Swing and sway with Sammy Kaye”, became one of the most famous of the Big Band Era. His signature tune was “Harbor Lights”. Kaye, born in Lakewood, Ohio, graduated from Rocky River High School in Rocky River, Ohio. Kaye could play the saxophone and the clarinet, but he never featured himself as a soloist on either one. A leader of one of the so-called “Sweet” bands of the Big Band Era, he made a large number of records for Vocalion Records, RCA Victor, Columbia Records, Bell Records, and the American Decca record label. He was also a hit on radio.