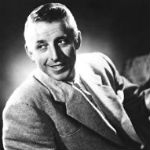 Stan Kenton (December 15, 1911 – August 25, 1979) was an American jazz pianist, composer, and arranger who led an innovative, influential, and often controversial jazz orchestra. Kenton learned piano as a child, and while still a teenager toured with various bands. Kenton played in the 1930s in the dance bands of Vido Musso and Gus Arnheim, but his natural inclination was as a band leader. In June 1941 he formed his first orchestra, which later was named after his theme song “Artistry in Rhythm”. A competent pianist, influenced by Earl Hines, Kenton was much more important in the early days as an arranger and inspiration for his loyal sidemen. Although there were no major names in his first, Kenton spent the summer of 1941 playing regularly before a very appreciative audience at the Rendezvous Ballroom in Balboa Beach, CA. Influenced by Jimmie Lunceford (who, like Kenton, enjoyed high-note trumpeters and thick-toned tenors), the Stan Kenton Orchestra struggled a bit after its initial success. Its Decca recordings were not big sellers and a stint as Bob Hope’s backup radio band during the 1943-44 season was an unhappy experience; Les Brown permanently took Kenton’s place.