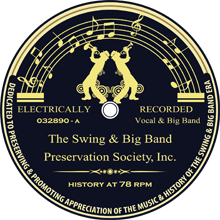 Swing & Big Band Preservation Society, Incorporated™ is a non-profit volunteer organization dedicated to preserving and promoting awareness and appreciation of vintage music and recordings of the Big Band and Swing Era from the golden age of popular music (1920’s – 1940’s). We regard such recordings as having both cultural and historical significance that deserve not only restoration for enjoyment today, but preservation for the benefit of future generations tomorrow. It is our belief that these vintage and often largely forgotten performances possess an artistic merit that is timeless and relevant as a source of enjoyment and education from one of America’s most challenging periods- from Prohibition to the Depression to World War Two- that can provide both historical relevance as well as inspiration to younger generations fortunate enough to discover them.

The essence of our mission is to bring the forgotten music and performers of the past to the attention of new and appreciative modern audiences. The Swing & Big Band Preservation Society, Incorporated™ is officially recognized by the Internal Revenue Service (IRS) as a non-profit 501(c) (3) charitable organization and contributions to us are fully tax-deductible.

Currently, our primary project is operating a 24-hour Internet radio station. Swing Street Radio broadcasts original vintage recordings of ‘20s, ‘30s & ‘40s popular music from a rare collection of Big Band and Swing music to an enthusiastic, worldwide audience. Our target audience is people who are discovering the era’s music for the first time as well as those who are knowledgeable lifelong enthusiasts. Many of the recordings played on Swing Street Radio have never been made available in modern formats. We take pride in providing our audience an opportunity to enjoy rare recordings that were previously accessible to only the fortunate few who happened to possess the original 78 rpm discs.

Our multi-media presentation “Those Flaming Forties” is an educational outreach to young adults on the significance of the music and history of the Swing & Big Band Era. One of the best ways to pass on the great music and recordings of the early 20th century and ensure that they have an appreciative audience in the future is by exposing upcoming generations to the music at an early age. When it comes to promoting the music to young people, one never knows what seeds will be planted and the impact it will have. A child who hears the music for the first time and finds it inspiring might grow up to someday be a professional musician or the Hollywood producer who will find a way to reintroduce the music into mainstream cultural awareness.

The Swing & Big Band Preservation Society is now accepting volunteers to help catalog our collection of Big Band and Swing music of more than 15,000 rare and priceless records from the early Jazz & Big Band Era, so that listeners from around the country and globe can enjoy the music and learn about the artists and history of the times behind them. Help be a part of saving these rare recordings for future generations to enjoy!

Volunteers are also needed to write brief vignettes for a daily radio feature called “Profiles in Swing” which highlights the artists and history of the Golden Age of Popular music- from Prohibition to the Great Depression to World War II.

Do You Love Big Band & Swing Music? Do You Have A Passion For History? Do You Enjoy Telling Stories? If so, The Swing & Big Band Preservation Society Needs YOU! No professional writing experience is necessary- just a couple of hours a week of your time, a computer, and a love of music and history of the 20th Century.