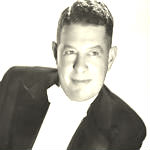 Anson Weeks (February 14, 1896, Oakland, California – February 7, 1969, Sacramento, California) was a pianist and the leader of a popular west coast dance band from the late 1920s through the 1960s, primarily in San Francisco. He formed his first band in 1924 and had key hotel jobs in Oakland and Sacramento, California. By the late 1920s he led a popular regional orchestra and started recording for Columbia in 1928. He garnered favorable attention in late 1931 on the “Lucky Strike Magic Carpet” radio program. His vocalists included Art Wilson, Harriet Lee, Donald Novis, Bob Crosby, Carl Ravazza, Kay St. Germaine, and Bob Gage. In 1932, he signed with Brunswick and recorded prolifically for them through 1935. During this time, his was one of Brunswick’s premier bands and was popular nationally.