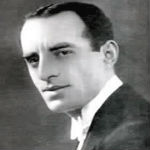 Bert Ambrose (11 September 1896 – 11 June 1971), was an English bandleader and violinist. Ambrose became the leader of a highly acclaimed British dance band, Bert Ambrose & His Orchestra, in the 1930s. Ambrose began playing the violin while young, and travelled to New York City with his aunt. He began playing professionally, first for Emil Coleman at New York’s Reisenweber’s restaurant, then in the Palais Royal’s big band. After making a success of a stint as bandleader, at the age of 20 he was asked to put together and lead his own fifteen-piece band.