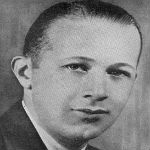 Bert Lown (June 6, 1903-November 20, 1962) was a violinist and orchestra leader. He was born in White Plains, New York. He began as a sideman playing the violin in Fred Hamm’s band, and in the 1920s and 1930s he led a series of jazz-oriented dance bands (the most famous being the Biltmore Hotel Orchestra), making a large number of recordings in that period for Victor Records. In 1925, with Hamm, Dave Bennett, and Chauncey Gray, he composed the well-known standard “Bye Bye Blues.” He also wrote some other songs, including “You’re The One I Care For” and “Tired.” By the mid-1930s he quit leading the orchestras, becoming a booking agent and manager; eventually he left the music industry and moved on to executive positions in the television industry. He died of a heart attack in 1962 in Portland, Oregon.