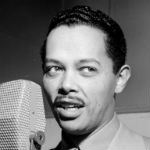 Billy Eckstine (July 8, 1914 – March 8, 1993) was an American jazz and pop singer, and a bandleader of the swing era. He was noted for his rich, resonant, almost operatic bass-baritone voice. Eckstine’s recording of “I Apologize” (MGM, 1948) was awarded the Grammy Hall of Fame Award in 1999. He attended Armstrong High School, St. Paul Normal and Industrial School, and Howard University. He left Howard in 1933, after winning first place in an amateur talent contest. Heading to Chicago, Eckstine joined Earl Hines’ Grand Terrace Orchestra in 1939, staying with the band as vocalist and trumpeter, until 1943.