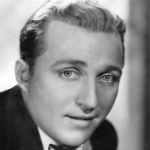 Bing Crosby (May 3, 1903 – October 14, 1977) was an American singer and actor. Crosby’s trademark warm bass-baritone voice made him the best-selling recording artist of the 20th century, having sold over one billion records, tapes, compact discs and digital downloads around the world. The first multimedia star, from 1931 to 1954 Crosby was a leader in record sales, radio ratings, and motion picture grosses. His early career coincided with technical recording innovations such as the microphone. This allowed him to develop a laid-back, intimate singing style that influenced many of the popular male singers who followed him. Yank magazine recognized Crosby as the person who had done the most for American G.I. morale during World War II. In 1948, the Music Digest estimated that Crosby recordings filled more than half of the 80,000 weekly hours allocated to recorded radio music.