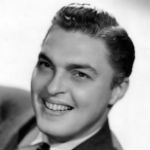 Bob Eberly (July 24, 1916, Mechanicville, New York – November 17, 1981, Glen Burnie, Maryland) was a big band vocalist, best known for his association with Jimmy Dorsey and his duets with Helen O’Connell. His younger brother Ray was also a big-band singer, most notably with Glenn Miller‘s orchestra. He recorded the original version of “I’m Glad There Is You” in 1942 with Jimmy Dorsey and His Orchestra. The song subsequently became a jazz and pop standard. In 1953, Eberly and Helen O’Connell headlined a summer replacement program for Perry Como‘s CBS television show.