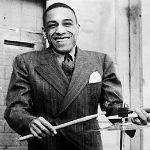 Chick Webb (February 10, 1905 – June 16, 1939) was an American jazz and swing music drummer as well as a band leader. From childhood, he suffered from tuberculosis of the spine, leaving him with short stature and a badly deformed spine; which caused him to appear hunchbacked. The idea of playing an instrument was suggested by his doctor to “loosen up” his bones. He supported himself as a newspaper boy to save enough money to buy drums, and first played professionally at age 11. At the age of 17 he moved to New York City and by 1926 was leading his own band in Harlem. Webb alternated between band tours and residencies at New York City clubs through the late 1920s. In 1931, his band became the house band at the Savoy Ballroom