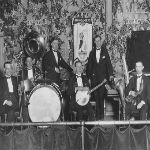 Coon-Sanders Nighthawk Orchestra was the first Kansas City jazz band to achieve national recognition, which it acquired through national radio broadcasts. It was founded in 1919, as the Coon-Sanders Novelty Orchestra, by drummer Carleton Coon and pianist Joe Sanders. Coon was born in Rochester, Minnesota in 1893. Sanders was born in Kansas in 1896. Sanders was known as “The Old Left Hander” because of his skills at baseball. He gave the game up in the early 1920s to make dance music his career. The orchestra began broadcasting in 1922 on WDAF, which could be received throughout the United States.