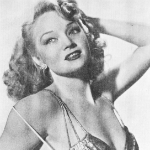 Ina Ray Hutton (March 13, 1916 – February 19, 1984), was an American vocalist, bandleader, and the sister of June Hutton. She began dancing and singing in stage revues at the age of eight and by the time she was 18 years old, Ina Ray was a seasoned performer. She had starred in Gus Edwards’ revue “Future Stars Troupe” at the Palace Theater and Lew Leslie’s “Clowns in Clover,” and on Broadway she performed in George White’s revues: “Melody”, “Never Had An Education,” and “Scandals”, and then onto The Ziegfeld Follies all by the time she was 18. In 1934, she was approached by Irving Mills and vaudeville agent Alex Hyde to lead an all-girl orchestra, the Melodears, one of the first all-girl bands to be filmed for Paramount shorts, including Accent on Girls and Swing Hutton Swing and Hollywood feature films under the management of national booking agent Irving Mills.