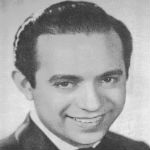 Jan Savitt (September 4, 1907 – October 4, 1948), known as “The Stokowski of Swing”, after having played violin in Stokowski’s orchestra, was an American bandleader, musical arranger, and violinist. He evidenced musical ability an early age and began winning conservatory scholarships in the study of the violin. He was offered the position of concert master in Leopold Stokowski’s Philadelphia Symphony Orchestra, but turned it down, preferring to continue his studies at Curtis Institute. About a year later, believing himself ready, he joined Stokowski and the association continued for seven years, during which time Savitt gained further laurels as a concert soloist and leader of a string quartet. His band The Top Hatters was formed in 1937 and began touring the following year. Their songs include “720 in the Books”, “It’s A Wonderful World” and his theme songs “Quaker City Jazz” and “From Out Of Space”. Savitt was one of the first of the big band leaders to feature an African American vocalist, George Tunnell (“Bon Bon”).