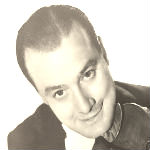 Joe Venuti (September 16, 1903 – August 14, 1978) was an Italian-American jazz violinist. In the early 1920s, Venuti moved to New York City, where he played in dance bands and jazz orchestras with Jean Goldkette, Red Nichols, Bix Beiderbecke, Adrian Rollini, and Frankie Trumbauer. He also played in the Roger Wolfe Kahn Orchestra with Eddie Lang, his friend since childhood. Venuti and Lang performed and recorded often together. Their jazz violin and guitar duo provided an example for Stéphane Grappelli and Django Reinhardt. Venuti pioneered the violin as a solo instrument in the jazz world. He was famous for a “hot” playing style characteristic of jazz soloists in the 1920s and the swing era. Venuti was a virtuosic player with a wide range of techniques, including left hand pizzicato and runs spanning the length of the fingerboard. He also frequently implemented slides common in blues and country music fiddle playing. He was particularly notable in small ensemble jazz, since the force of the horns in big band jazz was sufficient to drown out the violin before the invention of the amplifier.