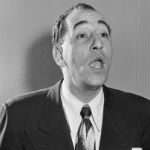 Louis Prima (December 7, 1910 – August 24, 1978) was an Italian-American singer, actor, songwriter, and trumpeter. Prima rode the musical trends of his time, starting with his seven-piece New Orleans style jazz band in the late 1920s, then leading a swing combo in the 1930s, a big band in the 1940s, a Vegas lounge act in the 1950s, and a pop-rock band in the 1960s. In September 1934, Prima began recording for the Brunswick label. He recorded “That’s Where the South Begins”, “Long About Midnight”, “Jamaica Shout”, and “Star Dust”. Prima and his New Orleans Gang was a band that consisted of five musicians. Frank Pinero was the pianist, Jack Ryan played bass, Garrett McAdams played guitar, while Pee Wee Russell played clarinet. The band had their first performance at a club called the “Famous Door”, owned and operated by Jack Colt. In May 1935, Prima and Russell recorded “The Lady in Red”, a national jukebox hit. They also recorded “Chinatown”, “Chasing Shadows” and “Gypsy Tea Room”. Martha Raye also played a role in Prima’s professional life, when the two were featured a show at the club that granted Prima his first national debut on “The Fleischman Hour”. In March 1936, Prima wrote and recorded “Sing Sing Sing“, which subsequently became a hit for Benny Goodman.