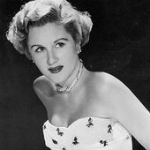 Margaret Whiting (July 22, 1924 – January 10, 2011) was a singer of American popular music who first made her reputation during the 1940s and 1950s. In her childhood, Whiting’s singing ability had already been noticed, and at the age of only seven she sang for singer-lyricist Johnny Mercer, with whom her father had collaborated on some popular songs (“Too Marvelous for Words”). In 1942, Mercer co-founded Capitol Records and signed Margaret to one of Capitol’s first recording contracts. Whiting co-starred on the 15-minute musical programs The Jack Smith Show and Club Fifteen. She also was a vocalist on The Eddie Cantor Show and was in the cast of The Philip Morris Follies of 1946 and The Railroad Hour. Additionally, she was hostess on the Spotlight Revue, and a featured singer on the transcribed Barry Wood Show. She also appeared in the part of a young Sophie Tucker, in the Lux Radio Theater production “No Time For Heartaches”.