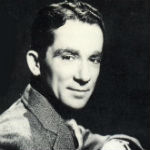 Red Nichols (May 8, 1905 – June 28, 1965) was an American jazz cornetist, composer, and jazz bandleader. Over his long career, Nichols recorded in a wide variety of musical styles, and is rumored to have appeared on over 4,000 recordings during the 1920s alone. Nichols kept himself alive during the first years of the Great Depression by playing in show bands and pit orchestras. He led Bob Hope’s orchestra for a while, moving out to California. On May 2, 1942, Nichols left his band to take an army commission, following completion of an engagement at Lantz’s Merry-Go-Round, Dayton, Ohio.Unable to stay away from music, Nichols formed a new Five Pennies band and began playing small clubs in the Los Angeles area soon after the war ended. Before long the word was out and musicians began showing up, turning his gigs into jam sessions.Soon the little club dates were turning into more prestigious bookings at the chic Zebra Room, the Tudor Room of San Francisco’s Palace Hotel, and Pasadena’s posh Sheraton.