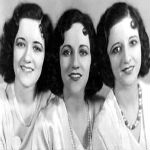 The Boswell Sisters were a close harmony singing group, consisting of sisters Martha (June 9, 1905 – July 2, 1958), Connee (December 3, 1907 – October 11, 1976), and Helvetia “Vet” (May 20, 1911 – November 12, 1988), noted for intricate harmonies and rhythmic experimentation. They attained national prominence in the United States in the 1930s. In 1925 they made their first record for the Victor Records. They appeared on radio programs and recorded music to be dubbed into films. The trio had a program on CBS from 1931 to 1933. After a few recordings for OKeh Records, recorded in Los Angeles in 1930, they made numerous recordings for Brunswick Records from 1931-1935. These Brunswick records are widely regarded as milestone recordings of vocal jazz. Connee’s reworkings of the melodies and rhythms of popular songs, together with Glenn Miller’s arrangements and New York jazz musicians (including the Dorsey Brothers, Benny Goodman, Bunny Berigan, Fulton McGrath, Joe Venuti, Arthur Schutt, Eddie Lang, Joe Tarto, Manny Klein, Dick McDonough, and Carl Kress), made these recordings unlike any others.