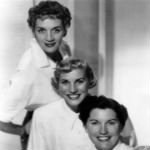 The Andrews Sisters were an American close harmony singing group of the swing and boogie-woogie eras. The group consisted of three sisters: contralto LaVerne (July 6, 1911 – May 8, 1967), soprano Maxene (January 3, 1916 – October 21, 1995), and mezzo-soprano Patty (February 16, 1918 – January 30, 2013). Throughout their long career, the sisters sold well over 100 million records. Their 1941 hit “Boogie Woogie Bugle Boy” can be considered an early example of rhythm and blues or jump blues. The Andrews Sisters’ harmonies and songs are still influential today, and have been covered by entertainers such as Bette Midler, Christina Aguilera, and others.