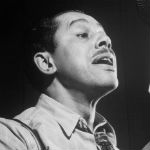 Cab Calloway (December 25, 1907 – November 18, 1994) was an African-American jazz singer and bandleader. He was strongly associated with the Cotton Club in Harlem, New York City, where he was a regular performer. Calloway was a master of energetic scat singing and led one of the United States’ most popular big bands from the start of the 1930s to the late 1940s. Calloway’s band featured performers including trumpeters Dizzy Gillespie and Adolphus “Doc” Cheatham, saxophonists Ben Webster and Leon “Chu” Berry, New Orleans guitar ace Danny Barker, and bassist Milt Hinton. The Cotton Club was the premier jazz venue in the country, and in 1931 Calloway and his orchestra (he had taken over a brilliant, but failing band called “The Missourians” in 1930; later on, the band changed its name to ‘Cab Calloway and His Orchestra’) were hired as a replacement for the Duke Ellington Orchestra while they were touring (he joined Duke Ellington and Mills Blue Rhythm Band as another of the jazz groups handled by Irving Mills).