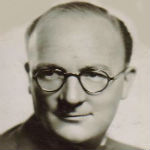 Billy Cotton (6 May 1899 – 25 March 1969) was an English band leader and entertainer, one of the few whose orchestras survived the British dance band era. Cotton is now mainly remembered as a 1950s and 1960s radio and television personality, but his musical career had begun in the 1920s. In his younger years Billy Cotton was also an amateur soccer player, an accomplished racing driver and the owner of a small plane which he piloted himself. In the early 1920s, he worked at several jobs, including as a bus driver, before setting up his own orchestra, the London Savannah Band, in 1924. Famous musicians who played in Billy Cotton’s band during the 1920s and 1930s included Arthur Rosebery, Syd Lipton and Nat Gonella. The band was also noted for their African American trombonist and tap dancer, Ellis Jackson. Their signature tune was “Somebody Stole My Gal”, and they made numerous commercial recordings for Decca. During the Second World War Cotton and his band toured France. After the war, he started his successful Sunday lunchtime radio show on BBC, the Billy Cotton Band Show, which ran from 1949 to 1968.