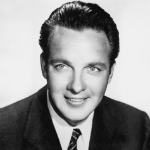 Bob Crosby (August 23, 1913 – March 9, 1993) was an American jazz singer and bandleader, known for his group the Bob-Cats. Crosby was born in Spokane, Washington, and is one of the younger brothers of vocalist Bing Crosby. Like his brother Bing before him, Crosby attended Gonzaga College, but he dropped out to seek a career in music. Crosby began singing in the early 1930s with the Rhythm Boys, which included vocalist Ray Hendricks and guitarist Bill Pollard, and with Anson Weeks (1931–34) and the Dorsey Brothers (1934–35). He led his first band in 1935 when the former members of Ben Pollack’s band elected him their titular leader. In 1935 he recorded with the Clark Randall Orchestra led by Gil Rodin and featuring singer Frank Tennille, father of Toni formerly of Captain and Tennille whose pseudonym was Clark Randall. In the mid-1930s, with the rise of “swing” music and the popularity of the swing bands ever increasing, the Crosby band managed to authentically combine the fundamental elements of the older jazz style with the then-rising-in-popularity swing style; the resulting music they produced as a big band had a sound and style that few if any other big bands even attempted to emulate.