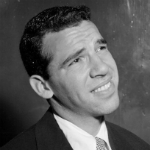 Buddy Rich (September 30, 1917 – April 2, 1987) was an American jazz drummer and bandleader. Widely considered one of the most influential drummers of all time and known for his virtuoso technique, power, and speed, Rich was billed as “the world’s greatest drummer” during his career. He performed with many bandleaders, most notably Tommy Dorsey, Harry James, Count Basie, and led his own big band. Rich’s talent for rhythm was first noted by his father, who saw that Buddy could keep a steady beat with spoons at the age of one. He began playing drums in vaudeville when he was 18 months old, initially billed as “Baby Traps the Drum Wonder”. At the peak of Rich’s childhood career, he was reportedly the second-highest paid child entertainer in the world (after Jackie Coogan). Rich first played jazz with a major group in 1937 with Joe Marsala and guitarist Jack Lemaire. He then played with Bunny Berigan (1938) and Artie Shaw (1939), and even instructed a 14-year-old Mel Brooks in drumming for a short period when playing for Shaw. At 21, Rich participated in his first major recording with the Vic Schoen Orchestra (the band that backed the Andrews Sisters). In 1938, he was hired to play in Tommy Dorsey‘s orchestra, where he met and performed with Frank Sinatra. In 1942, Rich left the Dorsey band to join the United States Marine Corps. He rejoined the Dorsey group after leaving the Marines two years later. In 1946, Rich formed his own band with financial support from Frank Sinatra, and continued to lead different groups on and off until the early 1950s.