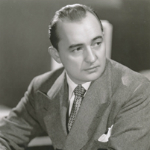 Freddy Martin (December 9, 1906 – September 30, 1983) was an American bandleader and tenor saxophonist. Martin led his own band while he was in high school, then played in various local bands. After a couple of years, his skill began attracting other musicians. One such musician was Guy Lombardo, who would remain friends with Martin throughout his life. One night, when Guy could not do a certain date, he suggested that Martin’s band could fill in for him. The band did very well and that’s how Martin’s career really got started. In 1938, he signed with Victor and was assigned to RCA’s Bluebird and Victor Records. Martin took his band into many prestigious hotels, including the Roosevelt Grill in New York City and the Ambassador Hotel in Los Angeles. A fixture on radio, his sponsored shows included NBC’s Penthouse Serenade of 1937. But Martin’s real success came in 1941 with an arrangement from the first movement of Tchaikovsky’s B-flat piano concerto. Martin recorded the piece instrumentally, but soon lyrics were put in and it was re-cut as “Tonight We Love” with Clyde Rogers’ vocal and soon became his biggest hit. It sold over one million copies by 1946, and was awarded a gold record.