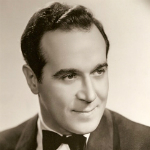 Russ Morgan (April 29, 1904 – August 7, 1969) was a big band orchestra leader and musical arranger in the United States during the 1930s and 1940s. He was one of the composers of “You’re Nobody till Somebody Loves You”. At fourteen, Morgan earned extra money as a pianist in a theater in Scranton. He also purchased a trombone and learned to play it. In 1921, he played trombone with a local band, the Scranton Sirens, which became popular in Pennsylvania during the 1920s. Besides Morgan, several of its members later became famous, including Jimmy Dorsey on sax and clarinet and Tommy Dorsey on trombone (who took Morgan’s place when Morgan left the band). For a short time in 1934, Morgan arranged for Fletcher Henderson’s Orchestra. In 1935, he played trombone with the Original Dixieland Jazz Band when they recorded four sides for Vocalion. Morgan’s biggest success came when he was offered the position of Musical Director for Detroit Radio Station WXYZ. His show, “Music in the Morgan Manner”, became one of the most popular radio shows. At one time during his radio run, he was directing nine commercial programs. While in Detroit, he did arranging for the Detroit 102 piece Symphony Orchestra demonstrating his varied musical experience and ability.