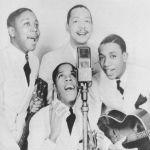 Ink Spots were an African-American pop vocal group who gained international fame in the 1930s and 1940s. Their unique musical style led to the rhythm and blues and rock and roll musical genres, and the subgenre doo-wop. The Ink Spots were widely accepted in both the white and black communities, largely due to the ballad style introduced to the group by lead singer Bill Kenny. In 1989, the Ink Spots (Bill Kenny, Deek Watson, Charlie Fuqua and Hoppy Jones) were inducted into the Rock and Roll Hall of Fame, and in 1999 they were inducted into the Vocal Group Hall of Fame. They first recorded for Victor Records in 1935, but although the group was growing rapidly in popularity their early record releases were not commercially successful.