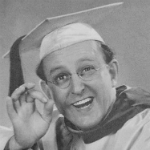 Kay Kyser (June 18, 1905 – July 23, 1985) was an American bandleader and radio personality of the 1930s and 1940s. Kyser graduated from the University of North Carolina at Chapel Hill with a Bachelor of Arts degree. He was also senior class president. Because of his popularity and enthusiasm as a cheerleader, he was invited by Hal Kemp to take over as bandleader when Kemp ventured north to further his career. He began taking clarinet lessons but was better as an entertaining announcer than a musician. He adopted the initial of his middle name as part of his stage name, for its alliterative effect. Although Kyser and his orchestra gained fame through the “Kollege of Musical Knowledge,” on radio, they were a successful band in their own right. They had 11 number one records, including some of the most popular songs of the late 1930s and early 1940s. Individual members of Kyser’s band became stars in their own right and would often receive the spotlight. Some of the more popular members included vocalist Harry Babbitt, cornetist Merwyn Bogue (a.k.a. Ish Kabibble), saxophonist Jack Martin (who sang lead vocal on the number one hit, “Strip Polka”), Ginny Simms (who had her own successful singing career after leaving Kyser’s band), Sully Mason, Mike Douglas (years before he became a popular TV talk show host) and Georgia Carroll.