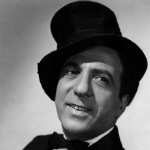 Ted Lewis (June 6, 1890 – August 25, 1971), was an American entertainer, bandleader, singer, and musician. He fronted a band and touring stage show that presented a combination of jazz, comedy, and nostalgia that was a hit with the American public before and after World War II. He was known by the moniker “Mr. Entertainment” or Ted “Is Everybody Happy?” Lewis. He first recorded in 1917 with Earl Fuller’s Jazz Band, and by 1919, Lewis was leading his own band, and had a recording contract with Columbia Records, which marketed him as their answer to the Original Dixieland Jazz Band who recorded for Victor records. For a time (as they did with Paul Whiteman) Columbia gave him a special record label featuring his picture. At the start of the 1920s, he was considered by many to be one of the leading lights of hot jazz. Ted Lewis and His Orchestra were one of the featured entertainers at the 1939 Golden Gate International Exposition in San Francisco.