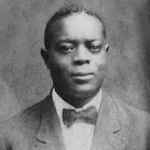 King Oliver (December 19, 1881 – April 10, 1938), was an American jazz cornet player and bandleader. He was particularly recognized for his playing style and his pioneering use of mutes in jazz. Also a notable composer, he wrote many tunes still played today, including “Dippermouth Blues”, “Sweet Like This”, “Canal Street Blues”, and “Doctor Jazz”. He was the mentor and teacher of Louis Armstrong. His influence was such that Armstrong claimed, “if it had not been for Joe Oliver, Jazz would not be what it is today.”  From 1908 to 1917 Oliver played cornet in New Orleans brass bands and dance bands, and also in the city’s red-light district (which came to be known as “Storyville”). A band he co-led with trombonist Kid Ory was considered to be New Orleans’ hottest and best in the late 1910s. Oliver achieved great popularity in New Orleans across economic and racial lines, and was in demand for music jobs from rough working-class black dance halls to white society debutante parties.  As mentor to Armstrong in New Orleans, Oliver taught young Louis and gave him his job in Kid Ory’s band when he went to Chicago. A few years later Oliver summoned him to Chicago to play with his band. Louis considered him his idol and inspiration. In his autobiography, Satchmo: My Life in New Orleans, Armstrong wrote: “It was my ambition to play as he did. I still think that if it had not been for Joe Oliver, Jazz would not be what it is today. He was a creator in his own right.”