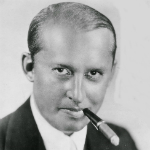 Ben Bernie (May 30, 1891 – October 23, 1943), was an American jazz violinist, bandleader, and radio personality, often introduced as “The Old Maestro”. He was noted for his showmanship and memorable bits of snappy dialogue. In 1923 Bernie and the Hotel Roosevelt Orchestra recorded “Who’s Sorry Now”, and in 1925 Ben Bernie and his orchestra recorded Sweet Georgia Brown. Bernie was the co-composer of this jazz standard, which became the theme song of the Harlem Globetrotters. Bernie and his orchestra were heard November 15, 1926, via a remote broadcast from the Hotel Roosevelt in New York City, on the first NBC broadcast. His musical variety radio shows through the 1930s, usually titled, Ben Bernie, The Old Maestro received ratings that placed him among radio’s top ten programs. His theme was “It’s a Lonesome Old Town” and his signature trademark, “yowsah, yowsah, yowsah” became a national catchphrase.