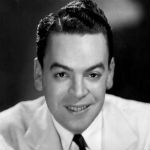 Les Brown (March 14, 1912 – January 4, 2001) was an American clarinetist, saxophonist, big band leader and composer, best known for his nearly seven decades of work with the big band Les Brown and His Band of Renown (1938–2001). Brown attended college at Duke University from 1932–1936. There he led the group Les Brown and His Blue Devils, who performed regularly on Duke’s campus and up and down the east coast. Brown took the band on an extensive summer tour in 1936. At the end of the tour, while some of the band members returned to Duke to continue their education, others stayed on with Brown and continued to tour, becoming in 1938 the Band of Renown. In 1942 he and his band concluded work on an RKO picture, “Sweet and Hot”; played at the Palladium Ballroom, Hollywood. A few years later, in 1945, this band brought Doris Day into prominence with their recording of “Sentimental Journey”.