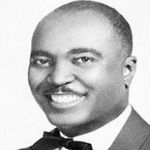 Jimmie Lunceford (June 6, 1902 – July 12, 1947) was an American jazz alto saxophonist and bandleader in the swing era. Lunceford went to high school and studied music under Wilberforce J. Whiteman, father of Paul Whiteman, whose band was soon to acquire a national reputation. As a child in Denver, he learned several instruments. After high school, Lunceford continued his studies at Fisk University.  In 1922, he played alto saxophone in a local band led by the violinist George Morrison which included Andy Kirk, another musician destined for fame as a bandleader. In 1927, while an athletic instructor at Manassas High School in Memphis, Tennessee, he organized a student band, the Chickasaw Syncopators, whose name was changed to the Jimmie Lunceford Orchestra. Under the new name, the band started its professional career in 1929, and made its first recordings in 1930. Lunceford was the first public high school band director in Memphis. After a period of touring, the band accepted a booking at the Harlem nightclub The Cotton Club in 1934 for their revue ‘Cotton Club Parade’ starring Adelaide Hall.