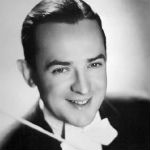 Jimmy Dorsey (February 29, 1904 – June 12, 1957) was a prominent American jazz clarinetist, saxophonist, composer and big band leader. Jimmy Dorsey was born in Shenandoah, Pennsylvania, the son of a coal miner turned music educator, and older brother of Tommy Dorsey who also became a prominent musician. He played trumpet in his youth, appearing on stage with J. Carson McGee’s King Trumpeters in 1913. He switched to alto saxophone in 1915, and then learned to double on clarinet. With his brother Tommy playing trombone, he formed Dorsey’s Novelty Six, one of the first jazz bands to broadcast. In 1924 he joined the California Ramblers (who were based in New York City). He did much freelance radio and recording work throughout the 1920s. The brothers also appeared as session musicians on many jazz recordings. He joined Ted Lewis’s band in 1930, with whom he toured Europe. After returning to the United States, he worked briefly with Rudy Vallee and several other bandleaders, in addition to the Dorsey Brothers Orchestra with Tommy.