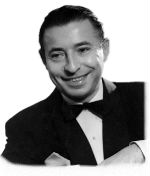 Joe Loss (22 June 1909 – 6 June 1990) was a British musician popular during the British dance band era, and was founder of the Joe Loss Orchestra. Loss was born in Spitalfields, London, the youngest of four children. He started violin lessons at the age of seven and later played violin at the Tower Ballroom, Blackpool and also with Oscar Rabin. Loss started band leading in the early 1930s, working at the Astoria Ballroom and soon breaking into variety at the Kit-Cat Club. In 1934 he topped the bill at the Holborn Empire but in the same year moved back to the Astoria Ballroom where he led a twelve piece band.