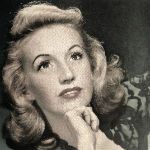 Martha Tilton (November 14, 1915 – December 8, 2006) was an American popular singer during America’s swing era and traditional pop period. She is best known for her 1939 recording of “And the Angels Sing” with Benny Goodman. While attending Fairfax High School in Los Angeles, she was singing on a small radio station when she was heard by an agent who signed her and began booking her with larger stations. After singing with the quartet Three Hits and a Miss, she joined the Myer Alexander chorus on Benny Goodman’s radio show, Camel Caravan. Goodman hired Tilton as a vocalist with his band in August 1937. She was with Goodman in January 1938, when the band gave the first jazz performance at Carnegie Hall. She continued to appear as Goodman’s star vocalist until the end of 1939. In 1941, Tilton sang on Fibber McGee & Molly and starred on Campana Serenade, a program of popular music on first NBC and then CBS in 1942-1944. A contemporary newspaper article called Tilton’s role on Fibber McGee and Molly “a milestone in her personal history … Martha’s biggest transcontinental broadcast since her days as soloist with Benny Goodman.”