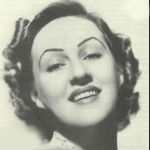 Ramona Davies (March 11, 1909 − December 14, 1972), usually billed as Ramona and her Grand Piano, was a cabaret singer and pianist, most popular in the 1930s. Ramona became a vocalist and pianist for Paul Whiteman’s Orchestra from 1932−1937. She played mildly jazz-influenced piano and sang songs in a deep-voiced, sophisticated style. She was sometimes featured by Whiteman with a small jazz group within the band, as well as recording sides as a soloist and duets with Roy Bargy. Prior to joining Whiteman, she had her own radio show in Cincinnati and also worked with Don Bestor. She performed on Whiteman’s radio show in 1933, Al Jolson’s radio show in 1933−1934 and the Kraft Music Hall in late 1934 through early 1935 (before Bing Crosby took over the radio program in 1936). She was featured with the Whiteman band in the 20th Century-Fox 1935 film Thanks A Million. She left Whiteman’s band in 1937 and worked as a single vocalist, then in the late 1930’s led a big band (recording for Varsity Records).