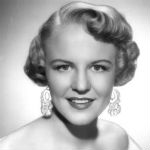 Peggy Lee (May 26, 1920 – January 21, 2002) was an American jazz and popular music singer, songwriter, composer and actress, in a career spanning six decades. From her beginning as a vocalist on local radio to singing with Benny Goodman‘s big band, she forged a sophisticated persona, evolving into a multi-faceted artist and performer. In 1942 Lee had her first No. 1 hit, “Somebody Else Is Taking My Place”, followed by 1943’s “Why Don’t You Do Right?“, which sold over a million copies and made her famous. She sang with Goodman’s orchestra in two 1943 films, Stage Door Canteen and The Powers Girl. In March 1943 Lee married Dave Barbour, a guitarist in Goodman’s band, and eventually left the band. She eventually drifted back to songwriting and occasional recording sessions for the fledgling Capitol Records in 1947, for whom she produced a long string of hits, many of them with lyrics and music by Lee and Barbour, including “I Don’t Know Enough About You” (1946) and “It’s a Good Day” (1947). With the release of the US No. 1-selling record of 1948, “Mañana“, her “retirement” was over. In 1948, Lee’s work was part of Capitol’s library of electrical transcriptions for radio stations. In 1948 Lee joined Perry Como and Jo Stafford as a rotating host of the NBC Radio musical program The Chesterfield Supper Club. She was also a regular on NBC’s Jimmy Durante Show and appeared frequently on Bing Crosby‘s radio shows throughout the late 1940s and early 1950s.