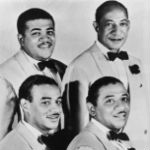 Mills Brothers were an African-American jazz and pop vocal quartet of the 20th century who made more than 2,000 recordings that combined sold more than 50 million copies, and garnered at least three dozen gold records. The Mills Brothers were inducted into The Vocal Group Hall of Fame in 1998. They entertained on the Midwest theater circuit, at house parties, tent shows, music halls and supper clubs throughout the area and became well known for their close harmonies, mastery of scat singing, and their ability to imitate musical instruments with their voices. With the help of Seger Ellis, WLW Cincinnati DJ and a music legend of the ’20s, they quickly became local radio stars and got their major break when Duke Ellington and his Orchestra played a date in Cincinnati.