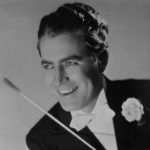 Orrin Tucker (17 February 1911 – 9 April 2011) was an American bandleader born in St. Louis, Missouri, whose theme song was “Drifting and Dreaming”. His biggest hit was “Oh Johnny, Oh Johnny, Oh!” (1939), sung by vocalist “Wee” Bonnie Baker. He founded his first band while a college student at North Central College near Chicago, Illinois. Orrin Tucker’s big band, which he formed in 1933, specialized in a more relaxed style of swing, which was somewhat less complex than the music of Duke Ellington, Benny Goodman and other famous contemporary bandleaders of the day. Tucker’s most successful hit was the 1939 recording of the 1917 song “Oh Johnny, Oh Johnny, Oh!,” featuring the singer Wee Bonnie Baker. It sold over one million copies, and was awarded a gold disc by the RIAA.[1] Orrin Tucker applied for active duty in the Medical Corps in the Navy; he left the Orchestra June 7, 1942 and by July 15, 1942 expected the call for duty. He later appeared on Your Hit Parade.