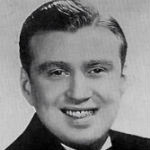 Richard Himber (20 February 1899 – 11 December 1966) was an American bandleader, composer, violinist and magician. His parents gave him violin lessons, but when they found him performing in a seedy Newark dive, they took the instrument away from him and sent him to military school. In 1915, he stole away into New York City, where Sophie Tucker heard him play and hired him as a novelty act to play with her and the Five Kings of Syncopation where Himber was the highlight of the cabaret act. He managed Rudy Vallee’s orchestra service, which sent out bands for private parties and society functions. A suave salesman and irrepressible idea man, he soon had his own band booking agency. Later that year, Himber finally formed an orchestra of his own, parlaying a gig at New York’s Essex House Hotel into national NBC radio exposure. Among the top-notch professionals in its ranks were Benny Goodman, Tommy Dorsey, Artie Shaw and many other future stars of the music world.