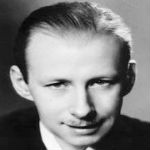 Ray Noble (17 December 1903 – 3 April 1978) was an English bandleader, composer, arranger, radio comedian, and actor. Noble wrote both lyrics and music for many popular songs during the British dance band era, including “Love Is The Sweetest Thing”, “Cherokee”, “The Touch of Your Lips”, “I Hadn’t Anyone Till You”, and his signature tune, “The Very Thought of You”. Noble also played opposite American ventriloquist Edgar Bergen’s stage act of Charlie McCarthy, and American comedy duo Burns and Allen. Noble was born in the Montpelier area of Brighton, England. Noble studied at the Royal Academy of Music and in 1927 won a competition for the best British dance band orchestrator that was advertised in the Melody Maker music magazine. In 1929, he became leader of the New Mayfair Dance Orchestra, an HMV Records studio band that featured members of many of the top hotel orchestras of the day. The most popular vocalist with Noble’s studio band was Al Bowlly, who joined in 1930. Noble took Al Bowlly and his drummer Bill Harty to the US and asked Glenn Miller to recruit American musicians to complete the band. Glenn Miller played the trombone in the Ray Noble orchestra during a performance at the Rainbow Room in 1935.