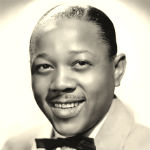 Roy Eldridge (January 30, 1911 – February 26, 1989), was an American jazz trumpet player. His sophisticated use of harmony, his virtuosic solos exhibiting a departure from the smooth and lyrical style of earlier jazz trumpet innovator Louis Armstrong, and his strong impact on Dizzy Gillespie mark him as one of the most influential musicians of the swing era and a precursor of bebop. Eldridge moved to New York in November 1930, playing in various bands in the early 1930s, including a number of Harlem dance bands with Cecil Scott, Elmer Snowden, Charlie Johnson, and Teddy Hill. He laid down his first recorded solos with Teddy Hill in 1935, which gained almost immediate popularity. For a brief time, he also led his own band at the reputed Famous Door nightclub. Eldridge recorded a number of small group sides with singer Billie Holiday in July 1935, including “What a Little Moonlight Can Do” and “Miss Brown to You“, employing a Dixieland-influenced improvisation style. In October 1935, Eldridge joined Fletcher Henderson’s Orchestra, playing lead trumpet and occasionally singing. Until he left the group in early September 1936, Eldridge was Henderson’s featured soloist, his talent highlighted by such numbers as “Christopher Columbus” and “Blue Lou.” His rhythmic power to swing a band was a dynamic trademark of the jazz of the time. It has been said that “from the mid-Thirties onwards, he had superseded Louis Armstrong as the exemplar of modern ‘hot’ trumpet playing”. In the fall of 1936, Eldridge moved to Chicago to form an octet with older brother Joe Eldridge playing saxophone and arranging. The ensemble boasted nightly broadcasts and made recordings that featured his extended solos, including “After You’ve Gone” and “Wabash Stomp.” Eldridge quit playing in 1938 to study radio engineering. He was back to playing in 1939, when he formed a ten-piece band that gained a residency at New York’s Arcadia Ballroom. One of Eldridge’s best known recorded solos is on a rendition of Hoagy Carmichael‘s tune, “Rockin’ Chair”, arranged by Benny Carter as something like a concerto for Eldridge.