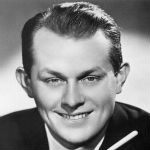 Vaughn Monroe (October 7, 1911 – May 21, 1973) was an American baritone singer, trumpeter, big band leader, actor, and businessman, most popular in the 1940s and 1950s. He has two stars on the Hollywood Walk of Fame; for recording and radio. Monroe formed his first orchestra in Boston in 1940 and became its principal vocalist. He began recording for RCA Victor’s subsidiary Bluebird label. That same year, Monroe built The Meadows, a restaurant and nightclub on Route 9 in Framingham, Massachusetts, west of Boston. The summer of 1942 brought a 13-week engagement on radio, as Monroe and his orchestra had a summer replacement program for Blondie on CBS. Monroe hosted the Camel Caravan radio program from The Meadows, starting in 1946 and, during this time, was featured in a Camel cigarettes commercial. In 1952, Monroe and his orchestra had a weekly program on Saturday nights on NBC radio. Those programs originate on location from wherever the band happened to be touring. Each program featured a focus on a college in the United States.