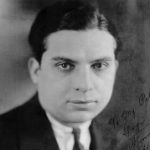 Eddie Lang (October 25, 1902 – March 26, 1933) was an American musician regarded as the father of jazz guitar. He displaced the banjo with the guitar and made it a worthy solo and band instrument. He learned violin at the age of seven, soon adding guitar and banjo. Within a year he was playing all three professionally and in public. In the early 1920s he played with Vic D’Ipplito, Bert Estlow, Charlie Kerr, Bill Lustin’s Scranton Sirens, and Red McKenzie’s Mound City Blue Blowers. During the 1920s he recorded and performed on radio, often with guitarist Joe Venuti, a friend since both were children; with Jean Goldkette, Roger Wolfe Kahn , Adrian Rollini, Frankie Trumbauer, Paul Whiteman; and with guitarists Lonnie Johnson, Carl Kress, and Dick McDonough. In 1929, Lang joined Paul Whiteman’s Orchestra. The following year he recorded the song “Georgia on My Mind” with Hoagy Carmichael, Joe Venuti, and Bix Beiderbecke. He became a regular in Bing Crosby’s orchestra in 1932. He also appeared briefly in two movies: King of Jazz (1930) and The Big Broadcast (1932). While most bands of the time had a banjo player (the banjo being louder than the guitars of the time), Lang was skilled enough to make his acoustic guitar heard in the mix.